10 years ago I was made redundant. At the time I was devastated. I loved my job, the work I did, the company I worked for and the people I worked with. I was on maternity leave with our first child and whilst I knew I was not going to return to my role, I think what upset me the most was that the decision had been made for me. I knew it was nothing personal, my entire department that had various sites across Australia were made redundant and the writing had been on the wall for a while.

After I had processed the fact that I wasn’t going back to the career I had created I took some time out from the workforce, had another child, followed my husband interstate so that he could progress his career and focused on completing my MBA. A couple of years later he also negotiated a redundancy and we returned to Adelaide and made the decision to start BRS.

For me, my involvement in BRS was only supposed to be short term, just until the business was up and running and earning enough income for me to then return to my career. As it turns out we have made a pretty good partnership and BRS has gone from strength to strength, so we must be doing something right….we are still working together and we are still married!

However, I was walking along the beach this evening and I ran into a friend who was made redundant today. She was incredibly positive and trying to look at the opportunities that she had before her, even though I know she is also worrying about upcoming school fees and how she is going to make ends meet.   It was the natural fears that come out when your financial and personal security is challenged.

If you have been made redundant, or you can see the writing on the wall, then I would like to remind you that redundancies aren’t the end of your career, they just force you to find a new path. In fact if you haven’t been made redundant at some stage within your career by now then you are probably within the minority. The workforce is not like it was 30 years ago, where you remain loyal and stay with the same company your entire life. For the most part future employers will not look at your redundancy as a negative, but they will look at what you do next and how you plan to respond in a positive manner.

I think what many of us struggle with and what we all find the hardest is the change. Change for most people can have a massive impact on your mindset, especially when the decision prompting that change is made for you.  It makes you feel that things are largely are out of your control which is challenging but also liberating at the same time when you think about the opportunities.

My advice for my friend, or anyone else who sees themselves in this position, take a few days to reflect and process what has just happened. Take the time to work out what it is you would like to do next, even put together a personal plan and think about where you want to be in three years time, across all areas of your life. Then start filling in the gaps to work out how you are going to get there, pick up the phone, utilise your networks and take action.

Looking back I have so many fond memories of my time with the company who helped shape my career and I probably didn’t realise at the time just how fortunate I was to have so many wonderful people and mentors who invested time in me during those years. I can’t believe it has been ten years since I was made redundant and for me as I reflect on what I have achieved since then it was probably the best thing that could have happened even though I did not know it at the time.

We all have choices and we all have the opportunity to make decisions that will shape who you become. A redundancy is just a catalyst for change, it’s up to you to see the upside and turn your redundancy into a positive. 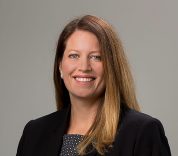 "I’m all about the journey. I love that we have the ability to work on projects with clients who value what we do and together we can achieve great outcomes. I believe that we need to ensure the foundations of our business are right by ensuring people receive the right support, resources and an environment in which they can thrive and deliver outstanding work to our clients."